Celebration of a Christian Brother’s Vocation Brother Jubilarians renew their vows, while young Brothers David, Paul, and Steven renew/recite for the first time, their annual vows. Jubilarians have a chuckle as their fellow Brothers and friends reflect on their lives of service. The new members of the Jeremy House Community, Kyle (left) and JD (right), with Br. David (center back) joining them in Philadelphia.

Lincroft, NJ – July 2018 closed with a District-wide celebration of Brotherhood in Lincroft, NJ. Christian Brothers, Lasallian Partners, family and friends gathered to honor our twenty-eight Jubilarians for their 1,500 collective years of service to the Institute, as well as welcome home our young men making their vows for the first time and also those who renewed their temporary vows. Prior to the gathering in Lincroft, our Brother Jubilarians were celebrated in Toronto, Canada. Brothers Dennis Lee and Thomas Casey were on hand to celebrate Brothers Francis McCrea, Nicholas Zimrose, and George Edwards as they gathered at Loretto Abbey for Mass. Each of these three Brothers celebrated hisr 70th Jubilee!

On Friday evening, Senior Brothers Thomas Barton, Raymund Buck, and Gabriel Fagan were celebrated for their 160 years of collective of service, with the De La Salle Hall community and visiting Brothers who gathered for Mass, and BBQ, a wonderful opportunity for Brotherly association and community. 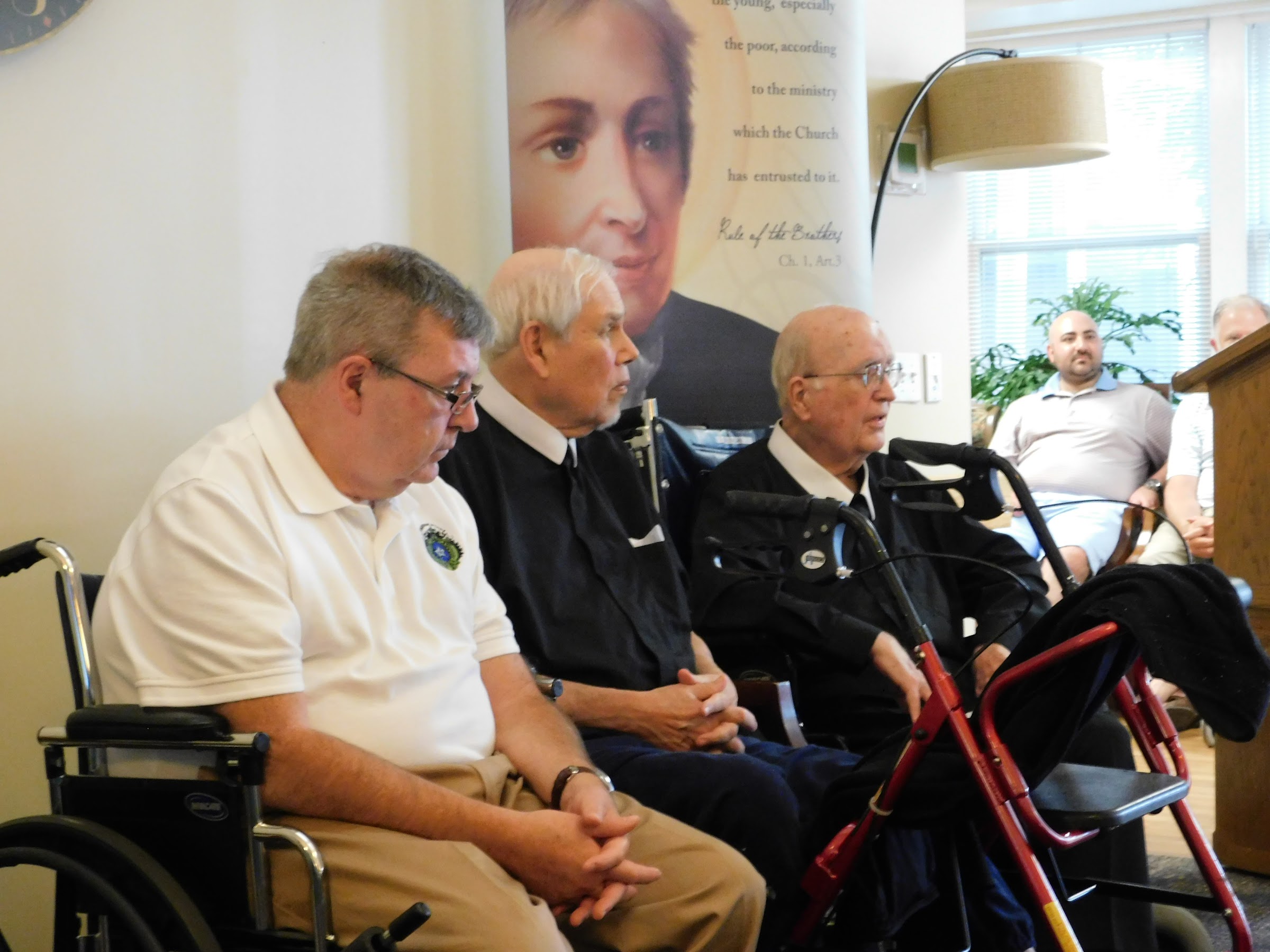 On Saturday, St. Mary’s Church would host the larger gathering to celebrate the rest of the Jubilarians of the District, but first, two young men would formerly request entrance into the Postulancy. J.D. Macioce and Kyle Mena, who have been part of the Brothers’ Contact program, took the next step in their discernment. In reciting First Promises as part of the Rite of Acceptance into the Postulancy, Brother Richard Buccina, Jeremey House and Postulancy Community Director, warmly received and welcomed Macioce and Mena into the program. The congregation gathered welcomed them as well, with boisterous and congratulatory applause. J.D. and Kyle were presented with St. La Salle medals and The Brother’s Rule, symbols of this next step in their discernment journey.

Thank you, Fr. Laffey for your presence, your homily, your understanding of the value of our vocation…

1500 years of commitment and service to our Institute, Church and world. If we connected the 1500 years together, we would go back to AD 518. Imagine. We would be so far back in time, that it was the early Middle Ages and the AD calendar was not even operative. We would have pre-dated the Second Council of Constantinople, and it would be centuries before saints were ever canonized…

Last evening at De La Salle Hall, many of us were present as we we celebrated three Brothers with 160 years of service. Last Sunday, Br. Thomas [Casey] and I were in Toronto for the celebration of 210 years: 3 Brothers with 70 years of commitment each [George Edwards, Francis McCrea, Nicholas Zimrose]. Amazing.

Shortly, Br. David Deradoorian will renew his annual vows. And fresh on the heels of their novitiate year in Chicago, Brothers Paul Avvento and Steven Barbaro will pronounce their vows for the very first time. God willing, they will one day celebrate 25, 40, 50 and more years as Brothers.

The vow formula has had some modification since Br. Ray Bronowicz first pronounced vows 70 years ago, and it really is a rich document, capturing so many essential elements of our vocation. The vows are rendered to God (Father, Son and Holy Spirit). The Brothers come with utmost respect before God, consecrating themselves entirely to God. They come united for a common purpose – that which was the reason our Founder founded us – to conduct schools for the service of the poor. Ours is a beautiful mission, so needed in our world.

The Brother Jubilarians were invited to the altar, to renew their vows, along with Brothers David, Paul, and Steven, who would renew/recite for the first time, their annual vows. Upon completion, the young Brothers would sign the Vow Formula, and the five young men, including J.D. and Kyle, were fraternally greeted by all of the Brothers gathered with the tradition of the Acolode.

After Communion and the conclusion of Mass, many of the Jubilarians were honored by a Brother of their choosing, sharing stories of their lives as Brothers, and members of the District community, honoring their years of good work and service. We also had the pleasure of welcoming home the Institute’s Superior General, and our District Brother, Robert Schieler, who celebrated his 50th Jubilee year. Also part of the congregation were three young men in the Contact program. This concluded their week-long Contact Retreat at the Cranaleith Center learning more about the Brother’s vocation, and the process of discernment. At this ceremony, these young men were able to see lives of service before them.

As always, the day’s celebration was capped with a reception at Christian Brothers Academy, Lincroft, providing the opportunity for congratulations, association, and connection.

Here are some reactions from our Brothers home from the Novitiate, Paul and Steven, and the newest Postulants, Kyle and JD!

A special congratulations to all our Brother Jubilarians!